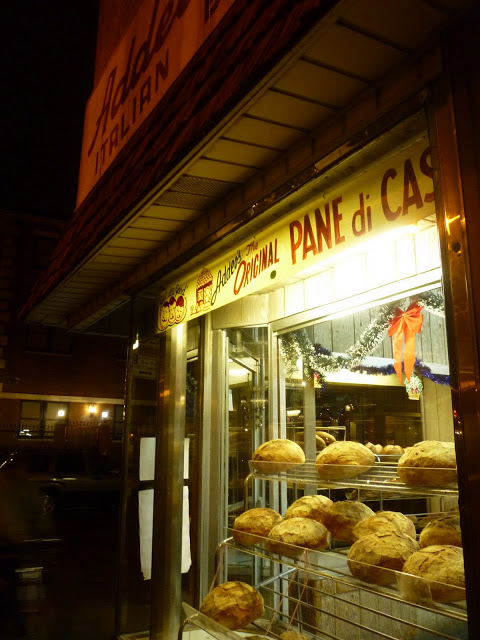 By doing a basic Google search on Addeo’s Bakery we discovered a blog titled, Lost City. On this blog the author who calls himself Brooks of Sheffield, wrote the following:

“I don’t know which bakery in the Belmont area of The Bronx is the best. But I know which one is the most beautiful. Addeo Bakery.

The Addeo Bakery is so ridiculously picturesque, it looks like a movie studio cooked it up. I don’t mean the one on Arthur Avenue, but the branch one block away on Hughes Avenue. It partly draws its stark pictorial loveliness from the fact that Hughes is largely unpopulated by shops. Addeo stands alone in Hopperesque glory on a lonely corner all its own. Your can gaze into the shop from two sides. Or just gaze at it from across the street, as I often do when I’m in the neighborhood.

The interior itself is classic and unspoiled. Ornate tile floor, shelves for bread, light fixtures, a scale or two and little else. Many loves of the bakery’s vaunted Pane di Casa—advertised in wonderfully homey,  hand-painted signs outside—adorn the window displays. They are crusty and magnificent, and it is a challenge to pass by and not purchase one.

If Addeo is the measure, nearly every other store in New York is an eyesore.”